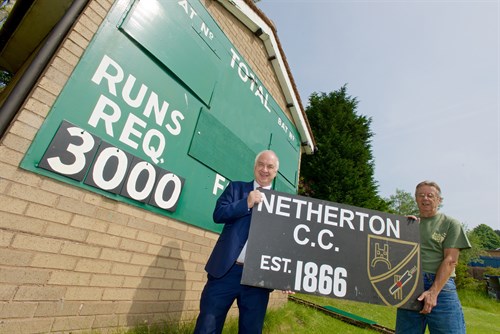 A Black Country cricket club that was broken in to seven times in eight weeks has been given £3,000 of criminals’ cash to improve its security.

Netherton Cricket Club had doors ripped from the hinges and windows shattered in the ‘wanton vandalism’ late at night. The thieves got away with sporting equipment, two flatscreen TVs, a microwave and bar stock.

The crimes left the club volunteers stressed, worried and demoralised.

To tackle the problem, the Office of the West Midlands Police and Crime Commissioner issued a grant of £3,000 from the Proceeds of Crime Act fund, which uses criminals’ ill-gotten gains for good.

The money was spent on fitting roller shutters on the windows, a new alarm system and CCTV.

Since then, after one more failed attempt at a break-in, there have been no further attacks on the clubhouse.

West Midlands Police and Crime Commissioner David Jamieson said: “There is a sense of justice in using criminals’ cash for good in the community.

“What happened at Netherton Cricket Club is awful. This is a historic community club run by volunteers that also offers lots of facilities for local youngsters and I can see why they were so disheartened to be the repeated victims of crime.

“I am so pleased this money has improved things at the club and I would encourage any community group that is facing similar issues to apply for POCA cash, which now comes under the Active Citizens umbrella.”

Dennis Lewis, President of Netherton Cricket Club added: “I would definitely encourage people to apply for this funding. The extra security measures we bought with the cash stopped the problems we were having back in late 2014. The crooks now find the clubhouse impenetrable.

“We were devastated during that awful period of break-ins. We’d get calls at 2am saying ‘it’s happened again’ and we’d be out fixing windows and doors. It was demoralising and it was getting to the point where we’d think ‘why bother’.

“But the grant changed all of that and we’d definitely encourage others to apply for this funding and make changes for the better.”

For more information on Active Citizens funding in your area, click here.

Alternatively, call the Office of the West Midlands Police and Crime Commissioner on 0121 626 6060.