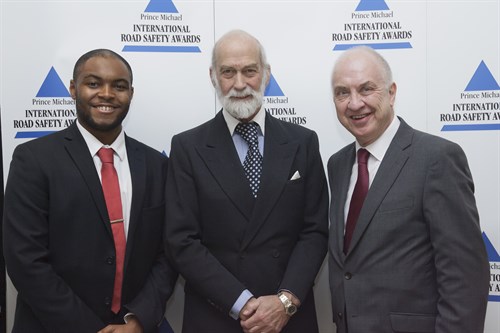 The awards celebrate achievement and innovation in road safety worldwide.

The PCC is a director on the Roadsafe Board, of which HRH Prince Michael of Kent is the patron and Nigel Mansell the vice patron.

Mr Jamieson said it was an excellent opportunity to learn about the very latest road safety initiatives and pick up best practice ways of working. He also met with Transport Minister Andrew Jones to discuss local issues for the West Midlands.

West Midlands Police and Crime Commissioner David Jamieson said: “This was a wonderful event that celebrated people from around the world who work tirelessly to make our roads safer.

“I found it an inspirational even and left with lots of ideas about things we could bring to the West Midlands.

“Road safety was the top concern from members of the public during the consultation stage of my Police and Crime Plan and I will do all I can in make our road network safer and stronger.”

The awards were held in London on December 13. People attended from all over the world, with representatives from the Department for Transport, DVSA, Highways Agency, RAC Foundation for Motoring, Michelin, Shell and Volvo.