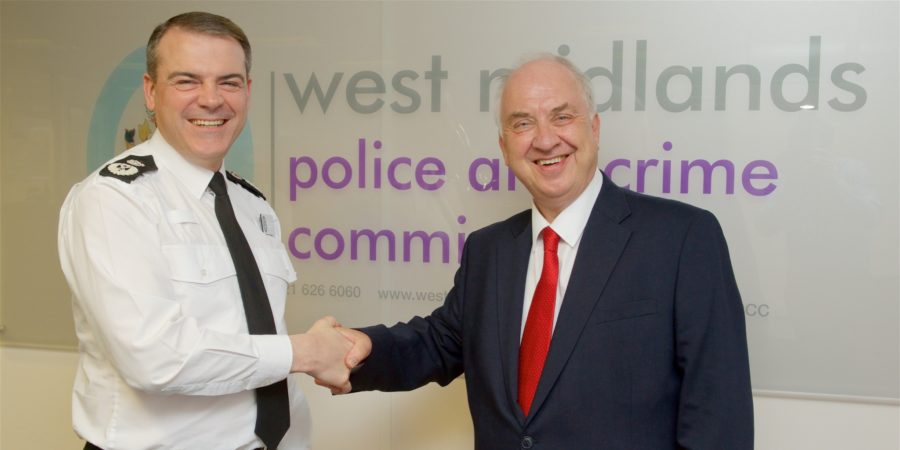 West Midlands Police and Crime Commissioner David Jamieson has taken the decision to extend Chief Constable Dave Thompson’s contract by a further two years, to give continuity of leadership through and past the Commonwealth Games. The PCC made the announcement at his Strategic Policing and Crime Board this morning.

The Chief Constable’s previous contract was due to expire in January 2021, he will now serve until January 2023.

The Commonwealth Games in 2022 and Coventry City of Culture in 2021 are set to be amongst the biggest security challenges ever faced by West Midlands Police. That is why the PCC has extended the Chief Constable’s contract to ensure an experienced policing leader is at the helm for both events.

Under the PCC and Chief Constable’s leadership the independent policing inspectorate has rated the force as good for all of their main assessments.

“The last few years have been incredibly challenging for West Midlands Police, our budget has shrunk at the same time as the demands we face are going through the roof. Dave Thompson has faced these challenges and managed them well.

“The Chief Constable is committed to delivering my plan of putting more officers into neighbourhood policing to help us tackle crime head-on.

“Dave Thompson has been a tough Chief Constable for tough times. He is upfront about the challenges the force faces, has always given me good advice and never been afraid to speak honestly to government.

“I wish Dave Thompson well over the next three years.”

Before joining West Midlands Police in 2010 as Deputy Chief Constable, Dave Thompson commanded the main policing operations for the 2002 Commonwealth Games at the City of Manchester Stadium including the opening and closing ceremonies.

In January 2016 the PCC appointed him as Chief Constable and is responsible for the operational running of the force within the Police and Crime Commissioner’s Plan. He is committed to delivering a modern policing service that prevents crime, protects people and offers help to those in need.

Chief Constable Thompson was awarded the Queen’s Policing Medal in 2014 for services to policing.

Chief Constable Dave Thompson, said: “It has been my privilege to serve the people of the diverse and exciting West Midlands as Chief Constable and am delighted that I will continue do so at an exciting time for the West Midlands with Coventry City of Culture next year and Birmingham hosting the Commonwealth Games in 2022 putting the region on the international stage. I am looking forward to using the extra officers the force will be see over the next few years to drive down crime and make the public even safer.”