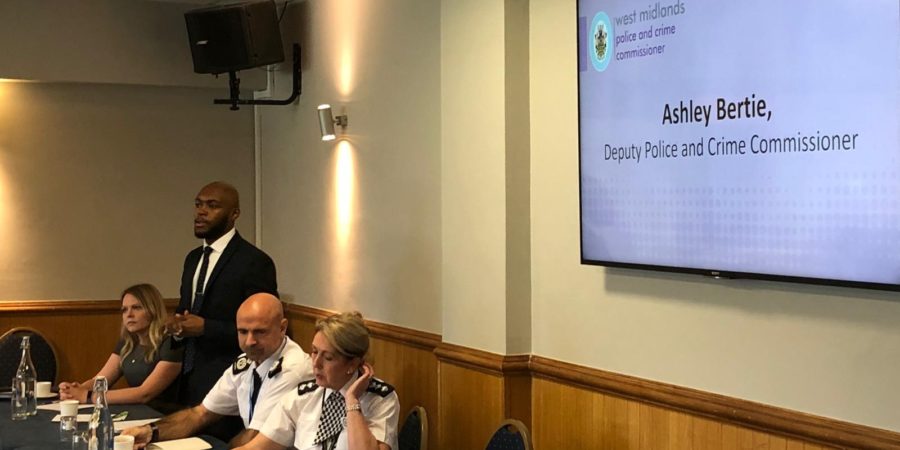 Naloxone was first given to officers in May and now the force and Police and Crime Commissioner’s office are sharing training and experiences so far, with other forces from across the country who attended a learning event at Tally Ho! yesterday (Tuesday 1 October).

The trailblazing initiative is also being supported by George Charlton – who has a history with addiction – and works with a number of organisations to develop a model for naloxone distribution.

Naloxone is the emergency antidote for overdoses caused by heroin and other opiates/opioids such as methadone, morphine and fentanyl. The main life-threating effects of these drugs are that the user can slow down and stop breathing. Naloxone blocks this effect and reverses breathing difficulties temporarily to buy time for the ambulance to arrive.

The training is voluntary for officers and is being rolled out initially to officers working in Birmingham city centre where rough sleeping and street drug use is highest.  Take up so far has been high with 51 officers trained to date and the force is keen to roll it out wider to help save lives.

George Charlton, who specialises in offering innovative and dynamic drug and alcohol awareness and harm prevention delivered from his life experiences, also gave a hard-hitting presentation during the event.

After suffering from physical and emotional abuse while at school, George struggled with low self-esteem and self-worth. He began using alcohol and cannabis to help his mood which developed into a mix of other opiate-based drugs.

George recalled ending up in hospital on many occasions where naloxone was used to reverse his overdoses. After getting support in a residential support centre, George started living a different life, he did a series of counselling qualifications and now offers training sessions to police, schools, drug and alcohol services and others across the country.

Deputy Police and Crime Commissioner, Ashley Bertie, who has helped drive through the new policy, said: “This event is about working with other police forces to share best practice. Earlier this year West Midlands Police became the first force in the country to have officers carrying naloxone on the streets. I hope many other forces will now follow our lead.

“Police officers are sometimes the first on the scene when there is an overdose. By providing officers with training to use naloxone means we can save lives in the West Midlands.

“This is a key part of our approach to tackling the harm drugs cause and I am proud that we are leading the way in the West Midlands. Officers carrying naloxone on the beat, was one of the Commissioner’s key recommendations to help reduce the harm caused by drugs. We should treat addiction as a health issue, rather than purely as an enforcement issue.

“In addition to expanding this programme within West Midlands Police, I am also committed to working with other agencies to increase the number of people who carry naloxone, so they can also intervene and save lives.”

Chief Inspector Jane Bailey, the force’s drug lead, said: “The use of naloxone is a really innovative and exciting initiative as we continue to tackle the issue of drugs and offer help and support to those at risk from drug overdoses.

“It was wonderful to share our journey so far with a number of other police forces and professionals who are all committed to reducing the harm drug use causes within our communities and offering the help and support where possible.

“The presentation from George was honest, emotive and inspiring. We all have so much to learn from his experiences.”