West Midlands Police has launched a Christmas campaign against stalking and harassment – as one of its own officers tells how she was tormented by a former partner after she ended their relationship.

The 28-year-old PC, who has asked to remain anonymous, received a flurry of unwanted gifts in the post – including flowers and jewellery – plus letters in which the ex-boyfriend made sinister promises to “never give up on you”.

He used photos of her on his Facebook profile, hacked into her social media accounts more than 250 times and stole images of her from private message exchanges.

The officer – who works as a response cop attending 999 emergencies – reported the 32-year-old’s possessive behaviour to police colleagues.

He was charged with stalking between July 2016 and March this year and went on to receive a suspended jail sentence and made subject of a restraining order banning him from making future contact.

She’s spoken out about her experience as part of a West Midlands Police campaign aiming to encourage victims to seek help by confiding in friends, family or a stalking charity and reporting the abuse to police.

She said: “It felt as though he still had a hold on me and even months after we’d split up I could still sense him there. I used to dread opening letters and parcels in case they were from him – and I couldn’t enjoy my birthday or Christmas as he’d send gifts and notes saying how he wasn’t going to let me go. I felt on edge all the time.

“I told him to stop, blocked his number, but he carried on and started contacting other family members. The final straw came when I realised he had my social media passwords and had logged into my profiles. I had no idea he was doing that until a friend pointed out that he was using pictures of me on his Facebook page.

“When I reported it to police it felt like a weight lifted off my shoulders – and when an officer came around to my house, and realised the extent of the harassment, they went to arrest him in the next couple of days.

“I feel as though I can move on with my life now and I would urge other people who are suffering to also seek support. I would say to trust your gut instincts; if someone’s behaviour feels wrong, it feels like you’re being violated, then contact a support group or the police.”

The campaign comes as West Midlands Police anticipates a seasonal rise in domestic abuse over the festive period. 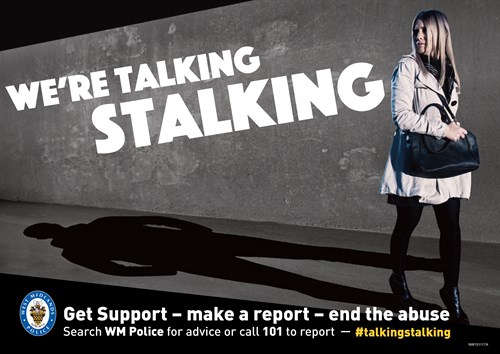 More than half (57 per cent) of reported stalking cases are domestic-related, with many victims being pursued by an ex-partner, and victims typically suffer 70 to 100 incidents before reporting abuse to the police.

West Midlands Police currently record 27 cases of stalking a month – but it’s suspected the true scale of stalking is much bigger.

Detective Inspector Jenny Bean is the force lead for stalking. She said: “Without doubt it’s an under reported offence – and the thrust of this campaign is about urging sufferers to contact us so we can offer help, support and investigate to see if a crime has been committed.

“We understand the distress unwanted, persistent attention can have on victims and anyone who feels they are being stalked or harassed should contact us. We always take reports seriously and work with charities and the College of Policing to listen and learn on how we can continue improving our service.”

In 2016, there were 290 reports of stalking made to West Midlands Police − it resulted in 61 people being charged and other people being cautioned or agreeing to out of court resolutions in line with victims’ wishes.

The Christmas campaign involves a series of videos that set out some of the most typical types of stalking: ex-partner stalking, social media stalking and one-date stalkers.

The force will also be hosting a Facebook chat to answer queries on the topic featuring both officers, victim’s families and charities.

As part of the campaign, West Midlands Police has partnered with the Hollie Gazzard Trust. It’s run by Nick Gazzard whose daughter was murdered by an ex-partner who stalked her.

He added: “Stalking is one of the most frequently experienced forms of abuse that can destroy the lives of victims and escalate to rape and murder. Raising awareness and educating everyone about stalking is important; early intervention is crucial and the more people talk about stalking, the more likely they are to get help to end the abuse.

“There are many different charities who provide help and advice online or over the phone. Safeguarding is of paramount importance and Hollie Guard is a free personal safety app developed in memory of Hollie Gazzard. All are encouraged to download the app to their smartphone that will help them feel safe and keep safe.”

And West Midlands Police & Crime Commissioner David Jamieson added his voice in support of the campaign: “The more people we get talking about stalking, the more people the police can help bring an end to the abuse.

“For victims of stalking the experience can be truly terrifying, with many suffering in silence. But let me state categorically that I will always ensure victims of stalking get the help they need. Tackling crimes of this nature and helping victims is a priority for me.”

For practical advice on how to document and deal with stalking and harassment visit the West Midlands Police website.