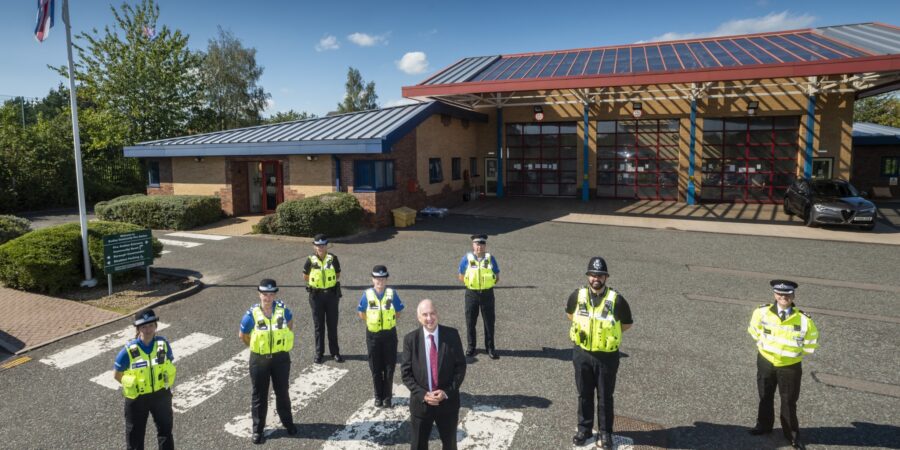 A number of Police Officers and PCSOs have now moved from Sedgley Police Station to Dudley Fire Station. This move will see officers collocating with the Fire Service and is part of the new West Midlands Police Estates Programme.

The Sedgley Neighbourhood Policing Team are now in the process of co-locating with the West Midlands Fire Service, a move which will save West Midlands Police money and make more efficient use of the fire service’s estate. It will also mean that Police Officers and PCSOs can work much closer and more effectively with staff from the fire service.

This comes as part of the West Midlands Police Estates Programme, announced in 2018, which will save the force £5m per year through disposing of underused buildings with millions of pounds worth of maintenance costs outstanding, and making other parts of the estate more efficient and fit for the 21st century.

Across the region a number of Neighbourhood Policing Teams have successfully co-located with other public services. By co-locating with other services West Midlands Police is able to save money and reinvest that money back into frontline policing.

The West Midlands Police and Crime Commissioner, David Jamieson said: “Co-locating with our colleagues at West Midlands Fire Service has allowed neighbourhood teams to remain where the public want them to be. At the heart of the communities which they serve.

“Not only will this move allow us to save money but it will also mean that officers are able to work much closer with the fire service.

“We have already seen the success of co-location in Walsall, where we have Police Officers and PCSOs working alongside the Council. This approach is allowing us to save money by protecting funding for neighbourhood policing, thus allowing recruitment of Officers and PCSOs.”

Assistant Director for Corporate Asset Management for West Midlands Police, Andy Kelly said: “Bringing our services direct to the public by working from joint community bases is a key part of our new strategy aimed at improving the services we provide to the public. We would like to have more officers co-located in shared premises based in the heart of local communities.”

Mike Griffiths, who heads Finance and Resources for West Midlands Fire Service, said: “Our 38 fire stations are true community assets which we aim to operate as efficiently as possible. A number of them already have shared arrangements with partner agencies or community groups.

“This initiative extends further our close working relationship with West Midlands Police and enhances the services we provide to local people.”

Neighbourhood Team from Sedgley moved into the new location on 30th September. These new locations do not serve as public contact offices and are not open to the public.