The West Midlands Police and Crime Commissioner is planning to free-up £5 million a year to invest in improving police buildings and protect 100 officer posts.

David Jamieson, who has seen his force’s spending power shrink by £145 million since 2010, is looking for new ways of protecting the number of police officers and staff keeping us safe.

The plan, which has yet to be finalised, would see 24 police properties, owned or occupied by the force, released. Many of the buildings are under occupied.

Only two of the twenty four police buildings included in the plans are open to the public. The other twenty two buildings are solely used as a base for officers and staff.

No police building, currently open to the public, will close without first being replaced by a more efficient one nearby. There are currently ten public contact offices where people can raise issues in person with the police. As a result of this proposed strategy ten will remain.

A new Events Control Suite which is fit for modern policing and ready to manage security around the Commonwealth Games will also be built as part of these proposals.

Whilst disposing of police buildings is never an easy decision to make, the PCC is confident this plan will improve efficiency and ensure more officers are able to remain in post in the West Midlands force area.

As part of the new estates strategy West Midlands Police would share space in an initial four West Midlands Fire Service buildings. Further plans to share buildings with other public sector bodies, such local councils and the NHS are being developed too. Whilst clearly this will help to reduce costs for the police it will also help public services work better together.

The need for efficiency savings like this is sadly necessary. Since 2010 West Midlands Police has lost over 3,000 staff and officers. Emerging crime threats also demand policing continues to adapt to the digital world and new investment is needed. To ensure the force is fit for the future, this comprehensive review of the police estate was undertaken. The review examined the space required by the force. The identified savings will be ploughed back into frontline policing to protect officer numbers or better maintain other parts of the police estate.

“After £145 million cuts since 2010 and with the level of funding from government being squeezed year on year, I am having to continue to find efficiencies to protect officer numbers. The £5 million annual savings proposed in this strategy will help protect 100 police officer posts.

“Crime is also changing and I need to ensure West Midlands Police has an estate that is equipped to help officers and staff respond to those crimes. Whilst the threats we face change, the public still need access to their police. That is why these proposals ensure that the current number of public contact offices will be maintained.

“The Commonwealth Games coming to the region in 2022 will be a great occasion, but it will also require a huge amount of planning and improved facilities for West Midlands Police to help keep us all safe.

“The proposals in this strategy are not finalised. That is why I have asked West Midlands Police commanders to talk and listen to the thoughts of their local communities over the next month.”

“Many of these sites have been part of the police estate for a number of years and as such, we understand local communities may feel a connection to specific buildings. However, most of our buildings have high running costs, are poorly located and are not fit for future operational purposes.

“The force’s ambition as we move forward is to ensure a high quality policing service to the people of the West Midlands.

“It’s important to remember policing is about people not buildings and it is vital we continue to question how much we invest in our estate and continue to maximise the service we provide to our communities.

“No police station will close until a new, more efficient public contact office opens in the local area.

“The force has introduced the latest technology to officers to help in the fight against crime and developed a mobile platform and new apps which allow officers to work more dynamically on the streets − saving them having to go back and forth to stations.

“If the proposals are given approval, a range of engagement activity will take place over the coming month to ensure we share the proposals with our local communities.”

“Officers and staff in the West Midlands do an excellent job keeping our communities safe and this refurbishment will not only save money, but will also mean they will have an improved working environment to carry out their vital duties.”

Police and Crime Commissioner David Jamieson has vowed to ensure the sale of buildings benefits the wider community, saying,

“With the sale of each building, I will be asking West Midlands Police to examine the benefits to the local community. I am committed to ensuring that the police buildings sold as part of this process create real social value, in addition to freeing up money to protect police officer posts. Our region, like other areas, is facing a housing crisis. I am keen that the under-occupied police buildings can make a contribution to addressing that, as well helping support employment and other services.” 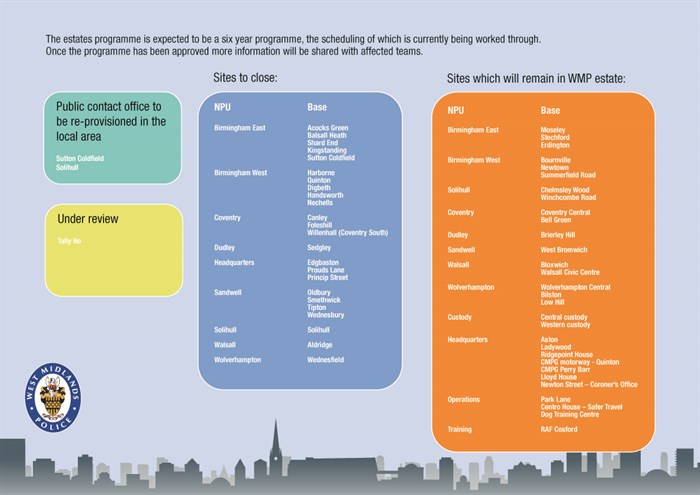 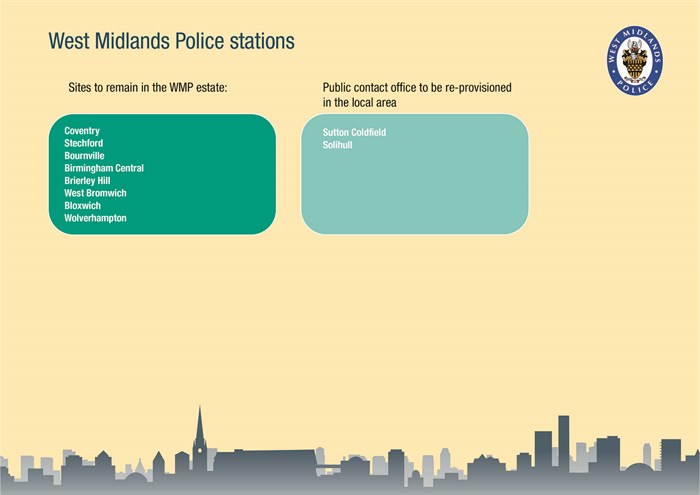