West Midlands Police’s plans for policing has been described as “outstanding” by the national police watchdog, HMIC. The report also highlights the harder cuts that West Midlands Police will be facing compared to the rest of England and Wales. 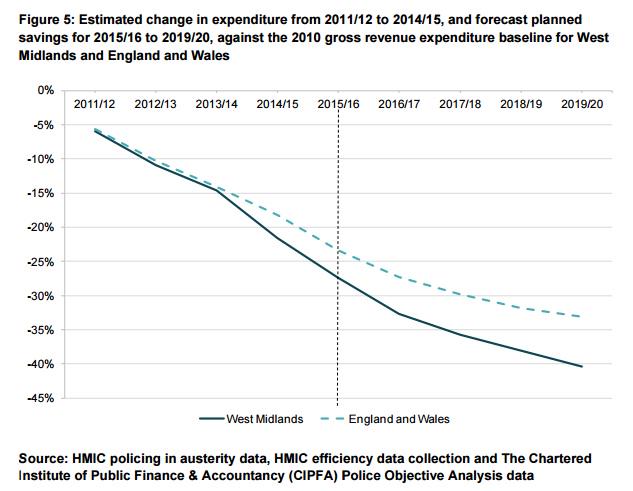 In a report out today (Tues Oct 20), the force’s five-year change programme WMP2020 – a strategic partnership with industry experts Accenture – is considered “ambitious and far-reaching” by HMIC inspectors.

The project sees a shift from reactive policing to a more preventative approach, with robust offender management, tackling problem families, and a partnership response to issues like mental health central to the switch in style.

And HMIC inspectors – who named West Midlands Police as one of only five ‘outstanding’ forces in England and Wales – also pointed to the force’s commitment to embrace new technology.

“This is independent report recognises that West Midlands Police have done an outstanding job in the face of disproportionate cuts.

“Austerity and the disproportionate impact that it has had on West Midlands Police remains a massive challenge.

“Our funding and the expected cuts in the Comprehensive Spending Review remain our biggest single challenge. This independent report recognises the huge efficiencies already made and our sensible plans for the future.

“I must be clear though, further disproportionate cuts above the levels already set out will be robustly challenged, as they would leave West Midlands Police in a very difficult position.”

The modernisation drive includes plans for an online crime reporting and case tracking facility, plus a move to arm officers with smart phones linked to police systems that will allow them to access information while en route to emergencies or at crime scenes.

HMIC highlighted that, as part of the new preventative approach, West Midlands Police is analysing demand ‘hotspots’ and undertaking problem-solving in these locations to reduce demand.

And it praised the force’s mental health triage scheme – the only one of its kind uniting psychiatric nurses, police officers and paramedics on a response vehicle – is achieving £642,000 a year in efficiency savings while providing on-the-spot help for people in crisis.

Since 2010, £146-million has been cut from West Midlands Police’s budget – equating to around 22 per cent of the total – and police officer numbers reduced by almost 1,500. Further similar spending cuts are expected by 2020.

Shops save £800k thanks to police scheme that tackles shoplifting