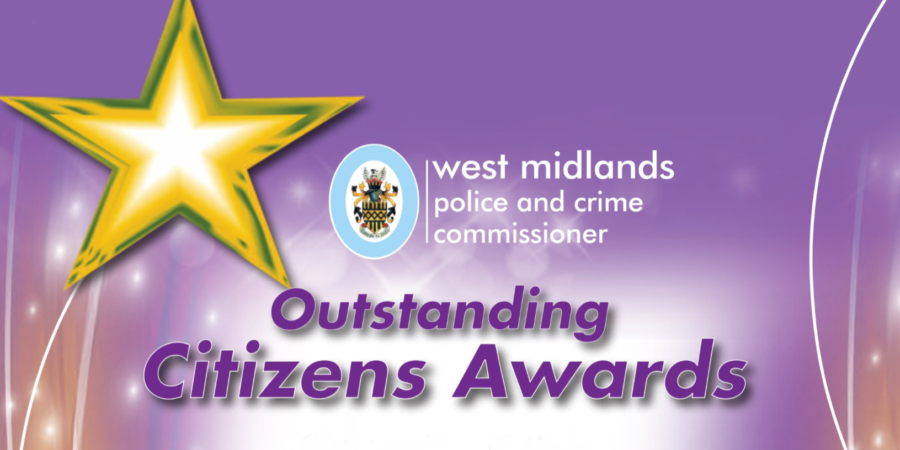 The winners of this year’s Police and Crime Commissioner Outstanding Citizen Awards have been announced.

This year the awards focused on recognising those who had gone above and beyond to support their community throughout the Coronavirus pandemic.

There were five main awards that were up for grabs and the winners for 2021 are:

Nominations are taken from the community and provide an opportunity to celebrate the un-told stories of those who volunteer, campaign or take part in acts of extraordinary bravery.

This year the Police and Crime Commissioner received over 200 nominations for the Outstanding Citizens Awards.

All of the winners have gone above and beyond in helping others through what has been an incredibly difficult year from feeding stranded lorry drivers in Dover to raising money to train NHS workers.

Commenting on the awards the West Midlands Police and Crime Commissioner, David Jamieson, said: “The past 12 months have been really difficult for everyone. The pandemic and lockdown has placed a significant strain on people’s mental health due the loss of family and friends, isolation and concerns over money and future employment.

“The winners of the Outstanding Citizens Awards have gone out of their way to support and care for the most vulnerable in our communities and I am proud that we are able to recognise their achievements.

“The Outstanding Citizens Awards have shown that in spite of the hardships that we have all faced there are many people out there who are working hard to make their communities a better place.

“All of our winners have made the West Midlands a better place to live and these awards recognise their hard work and dedication.”

As well as the five main award there were two bravery awards given out on the night as well.

The first bravery award was given to Yasser Baig, Mohammed Shuaib Zaqirah and Nighat Khatoon who bravely intervened to help two children aged 2 and 3 whilst they were being attacked by a guard dog who escaped from a nearby business in Saltley.

Without a thought for her own safety, Nighat stopped her car in the middle of the road and ran towards the incident fighting off the dog and was quickly joined by neighbours, Yaser who kicked the dog and picked one child up and Mohammed who pulled the other child into the safety of the car.

Thanks to their quick thinking and bravery the children did not sustain life threatening injuries and are recovering well.

“Their quick thinking saved the children’s lives. I am proud that we are able to recognise the bravery that they have shown.”

The second bravery award went to retired police officers Joan and Joe Tildsley and their neighbour Phoebe Hammond who all made courageous efforts to stop Phoebe’s car from being stolen.

The incident happened at Phoebe’s property. Three offenders entered her home and forced her to hand over the keys to her car. Two of the offenders then left the scene and the third offender gained entry into the Audi but was unable to make off with the vehicle.

After hearing Phoebe shouting, Joan and Joe rushed outside to assist Phoebe with trying to stop the vehicle.

Phoebe managed to gain access to the rear nearside door, however, the offender had managed to start the car up.

As the offender made his escape, he collided with Joe who as a result had to be taken to Warwick Hospital with five fractured ribs, a fractured toe, damaged right knee and whiplash.

Commenting on the incident, West Midlands Police and Crime Commissioner, David Jamieson stated “The courage shown by Phoebe, Joe and Joan to intervene in this incident shows an incredible sense of community.

I am very proud to see that even after retiring, Joe and Joan are still dedicated to protecting the residents of the West Midlands”

Joe retired from West Midlands Police in 2002 as an Inspector, and Joan in 2006 as a Sargent.

Joe has been a valued member of The West Midlands Police Benevolent Fund for the last 28 years. During that time he has helped both serving and retired officers often going above and beyond what would be expected.

You can watch the awards below

Langar Aid have worked tirelessly throughout the pandemic to provide food to those who are homeless, isolated and vulnerable. They also delivered food to stranded hauliers in Dover on Christmas Day.

Christine and Nargis have worked to ensure the most vulnerable children at their school have not gone without food throughout the pandemic.

Thalia has raised thousands to train a nurse at Coventry University. She has also worked  to make Christmas time special for young children despite the pandemic and turned a stable into a magical grotto.

PC Chandler worked with partners during the first lockdown to support those who are homeless and sleeping rough. She works closely with the local community to support the most vulnerable.

Jill has worked hard to ensure that police staff have been supported throughout the pandemic. She has also raised a considerable amount of money for charities.

Yasser, Mohammed and Nighat all intervedned to stop a dog from attacking two young children.

Joe, Joan and Phoebe all intervened to try to help prevent a car being stolen.