A campaign to raise funds for a national police memorial has been launched in Birmingham today (Weds 17 May) − and West Midlands Police has underlined its support for the project with a £5,000 donation.

The fundraising push for a remembrance site at the National Arboretum in Staffordshire − to honour more than 1,400 police officers and staff who have died in the line of duty − will be announced at the Police Federation’s ICC conference. 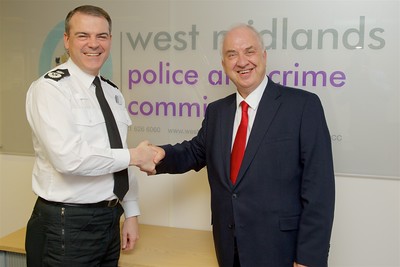 It’s hoped the memorial − which will cost an estimated £4-million and include a 50ft plaque with leaf-shaped apertures representing the lives lost − will be completed by 2019.

West Midlands Police Chief Constable Dave Thompson, said: “Since West Midlands Police was established in 1974, 40 police officers have died while on duty and protecting the public. They will never be forgotten; there are local and regional memorials but it feels only right and proper to have a national memorial where everyone can pay their respects.

“Behind every fallen police officer or member of police staff are those left behind: a spouse, partner, parents, children, friends and colleagues. A UK police memorial will be a place where they can go to reflect and remember those who have died.”

The proposed memorial − with lawn space for 1,500 people during ceremonies − will be interactive and visitors will be able to access smart phone audio tours, pay tributes digitally via an app and browse an ‘on this day’ feature giving information and news on major policing incidents from the past.

Once the epitaph is built, a Living Memorial Fund will be set up to maintain the site and provide funds to support the loved ones of those who’ve died.

West Midlands Police & Crime Commissioner David Jamieson, who signed off the force’s donation alongside the Chief Constable, added: “I am very proud to be supporting the UK Police Memorial.

“More than 1,400 police officers and staff have died from injuries they sustained whilst carrying out their police duties. It is only right that their sacrifice is recognised in this way.”

For more information about the UK Police Memorial, to make a donation or get involved in fundraising activity, visit www.ukpolicememorial.org.

Anyone making a donation of more than £20 will receive a Sillitoe wristband inscribed with the words ‘courage and sacrifice’.