WMP Cadets are back!

Police cadets will return to the West Midlands this autumn, as the force relaunches the popular youth scheme.

The voluntary scheme last operated across the region in 1998 but, as part of his police and crime plan, Commissioner David Jamieson announced last year that they would return as a key link between the force and the younger generation. 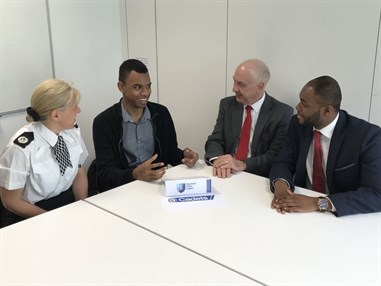 The scheme will initially launch in Birmingham and Sandwell with other areas of the West Midlands expected to come on board over the course of the next year.

The scheme will be aligned to local schools, who will play host to units, with Washwood Heath Academy, Holte School, Shireland Academy and Holly Lodge Science College the first to welcome WMP Cadets, after the start of the new school year.

The deadline for the first wave of volunteer applications to be cadet leaders is Friday 28 July. Colleagues from across the force are urged to get behind the scheme, by spreading the word in local communities while offering practical help. We need police officers, PCSOs, Specials and staff to commit some of their free time every week, during school term, including the occasional weekend commitment, as volunteer cadet leaders.

ACC Sarah Boycott, force lead for local policing, said: “There is huge fondness nationally for cadet schemes and I believe that previously the force ran a very successful programme, which directly fed into our PC recruitment.

“We have officers with us now who have enjoyed long and successful careers with West Midlands Police, having initially joined as a youngster in the cadets.

“This time, WMP Cadets is a scheme designed to give our young people a greater sense of community, inclusion and understanding of who we are.

“It will be wonderful if those who participate are inspired to join us in the future as a new recruit, but that is not the direct aim.

“We want to better understand and connect with teens living, working and socialising in our region and for them to engage with us. Colleagues in the armed forces and other emergency services all run similar schemes very well and it’s fantastic to see we too are taking the first step.”

In time, the force will be opening up for applications to join WMP Cadets as both a young member and as a volunteer cadet leader. Every volunteer will have access to a variety of professional development opportunities and the chance to have a sustained and positive influence in the lives of our young people. The scheme will be open to 13 to 17-year-olds and will eventually operate every week, during term time, across the force with cohorts of up to thirty cadets per unit.

Each unit will follow a curriculum set by the national body, Volunteer Police Cadets, alongside force-specific talks, visits and even deployment at events such as Remembrance Day and Birmingham Pride.

Chris Thurley, Assistant Director in the new look People and Organisation Development (POD) said: “We are very proud to be relaunching WMP Cadets – something both the force and our communities have wanted to see return for some time.

“It’s great to think that in a matter of weeks we will again have local teenagers in a West Midlands Police uniform, learning all about the force and helping them to become rounded, active citizens of the West Midlands.

“We aim to recruit in areas where intervention would help young people and support them in wider career opportunities.

“However, the programme will also provide them with a great insight into the force and could well prove to be a pathway to joining us as a police officer recruit in the future.”

The ethos behind WMP Cadets is to build active young citizens while providing a platform to engage with younger members of local communities.
Police and Crime Commissioner David Jamieson said: “This was a key promise that I made to the public in my manifesto and am delighted that it is launching.

“I have initiated this scheme after numerous young people approached me to get the cadets up and running again.

“The cadets will make a real difference to the lives of young people and will enhance the force.”

The cadets scheme is one of the key projects being delivered by the new look People and Organisation Department, created as part of the WMP2020 modernisation programme for the force.

It doesn’t matter where you live or work, volunteer cadet leaders will be needed throughout the region to get the scheme up and running, so let us know if you are interested. If you are, please contact Abigail Simkin, the cadets implementation manager, at cadets@west-midlands.pnn.police.uk with details of your location and availability.