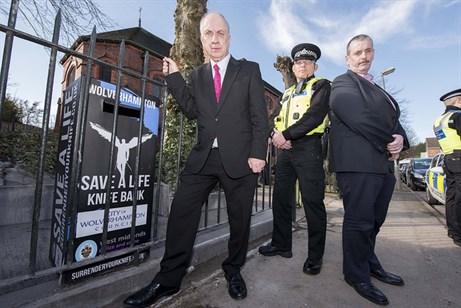 It’s after a new safe and secure container, which is designed for people to safely dispose of knives, was unveiled today at St Chad and St Mark’s Church in Lime Street, Wolverhampton.

Wolverhampton now has 4 weapon surrender bins, all funded by the PCC. The other Wolverhampton bins are located in Heath Town, Whitmore Reans and Bilston

Commenting on the arrival of a new bin the West Midlands Police and Crime Commissioner, David Jamieson, said: “I’m very pleased we have been able to provide another surrender bin for Wolverhampton.

The bins are providing people with a legal and safe way to dispose of knives which they shouldn’t be carrying. Every knife posted into a surrender bin is potentially a life saved.

These bins work best when the community wants them and in Wolverhampton the message we have been receiving loud and clear is that more are needed”. 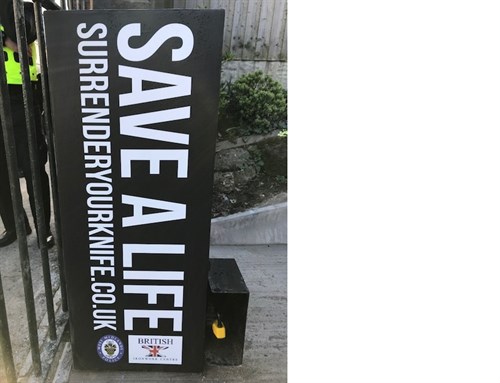 The other bins are based across Birmingham and Sandwell.

The PCC installed the bin with the full backing of the City of Wolverhampton Council. Its leader, Cllr Roger Lawrence, said: “This is our fourth knife bin in Wolverhampton and, like the others, it will have an important role in helping to prevent crime.

“Very simply, if knifes are taken off the streets then they cannot be used to commit a crime or cause injury.

“Sadly, knives are very easy to obtain. We have to ensure that people, particularly young people, are aware that if they take a knife out with them they could end up facing a murder charge.”

Meanwhile, Chief Superintendent Jayne Meir from West Midlands Police said: “We work very closely with the community, council and other partners in Wolverhampton to prevent the harm caused by knife crime.

“We are very grateful to St Chad and St Mark’s Church for allowing the placement of this additional knife bin.

“Alongside encouraging the disposal of knives we ask the public to give us any information that might help us to protect our young people and I would urge them to contact us on 101 or through Crime Stoppers on 0800 555111.”

The 13 knife bin locations across the West Midlands are: