Wolverhampton student must not be deported

The West Midlands Police and Crime Commissioner, David Jamieson, is calling on the Home Office to ‘act quickly’ and ‘see sense’ after a Wolverhampton student, who has been offered a place at the University of Oxford, was told he might be deported.

Brian White, who is now 21, moved to the UK from Botswana aged 15 with his adoptive family. Mr White lived in a Zimbabwean orphanage until the age of six. He was fostered and later adopted by the White family, who eventually moved to the UK. In 2014, his application to become a British citizen by naturalisation was rejected. When he arrived he was granted limited leave to remain by the Home Office, rather than indefinite leave. His family appealed, but that was also rejected. He is now awaiting the decision of a current application. 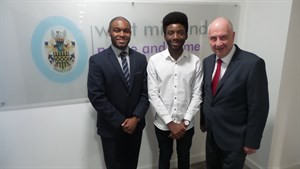 If he was forced to leave the UK he would also lose his place at Oxford University. The straight A pupil has been accepted on a Chemistry course at the top British academic institution.

Following a meeting on Friday afternoon (1st Sept 2017) with Mr White the Police and Crime Commissioner, David Jamieson, said: “This is a distressing situation for anyone to find themselves in. When I heard Brian’s story I felt so angry for him. Brian is an exceptionally bright and talented young man and he must be allowed to fulfil his full potential. I am urging the Home Office to act quickly, show compassion and see sense. Brian’s case should be fast tracked so he can complete his education in Britain.”

Mr White said: “I’m very grateful to the Police and Crime Commissioner for the support he’s offered me. If I’m deported it would turn my life upside down. My friends and my family are all in the UK. To leave them would be heart breaking. When I was offered a place at Oxford Uni I was over the moon. Now my life, as I know it, is hanging by a thread.”