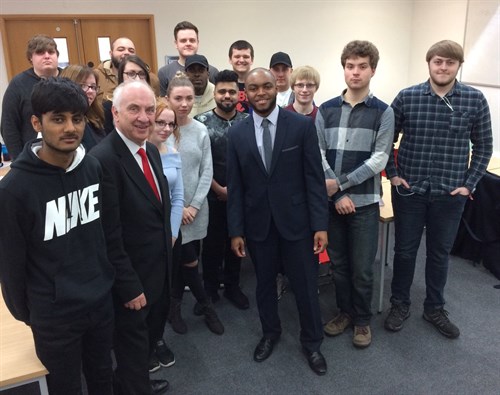 The PCC spoke on accountability and explained how important it is in maintaining an effective and transparent police force. The talk outlined themes such as diversity, recruitment and drug policy and gave students the oppurtunity to pose questions about policing priorities in the West Midlands.

“When Police and Crime Commissioners were first elected in 2012, they were intended to act as a bridge of democracy which connected the public to its policing service. Making a positive difference to local policing is important, however it is equally important to ensure that the public are aware of change, and are able to have a say in how they are policed.

“Police and Crime Commissioners have opened up policing to scrutiny, change and improvement. Therefore it is only right that the public can also scrutinise me and my actions.”

“It is right that the public are able to have a say in how the police operate. Stop and Search is now very much in the public eye, and our recently established Stop and Search Youth trainers buiuld on the good work that has been done on this issue since 2014. They are able to deliver workshops in schools across the West Midlands. and inform children about their rights in relation to stop and search.

“They function as ‘agents of accountability’ in that they know their rights, and are able to inform those at the top about what is happening on the ground. This is accountability in action.”