Builders have started to lay the foundations for the development of the new facility expected to be operational by April 2016. 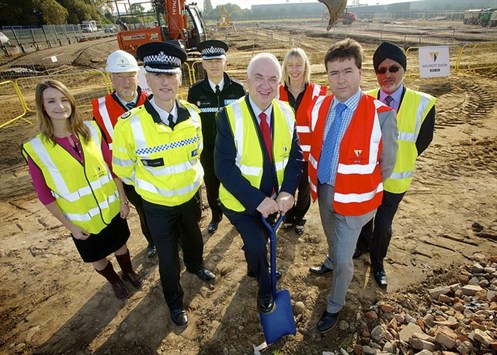 Building started on a similar custody suite in Bromford Lane, Oldbury, close to Sandwell and Dudley train station in March.  The Sandwell site is due to open by next spring.

The force first revealed its intention to improve its custody facilities with the building of the two custody suites last year.

Permission to build the first site on Bromford Lane, Oldbury, was granted in June 2013, from Sandwell Council.

This was followed by approval from Birmingham City Council for the custody suite, on Holford Drive, Perry Barr, at the end of last year.

The Perry Barr suite, is being built on an x acre site and will have 60 cells, together with improved facilities for interviewing suspects, consulting with solicitors, gathering evidential samples and to allow medical treatment from doctors and nurses.

The site will also have additional office accommodation for detectives and police staff.

Newly elected Police and Crime Commissioner David Jamieson said: “This is an important investment for policing across the West Midlands and will bring our custody facilities right up to date, deliver greater efficiency and better use of resources as well as allowing us to stop using older inefficient cell blocks.”

ACC Gary Cann, from West Midlands Police, said: “The new custody suites will ensure we have the facilities and processes that best meet the needs of those we detain, many of whom are vulnerable, as well as providing an improved working environment for the officers and staff who work there.”