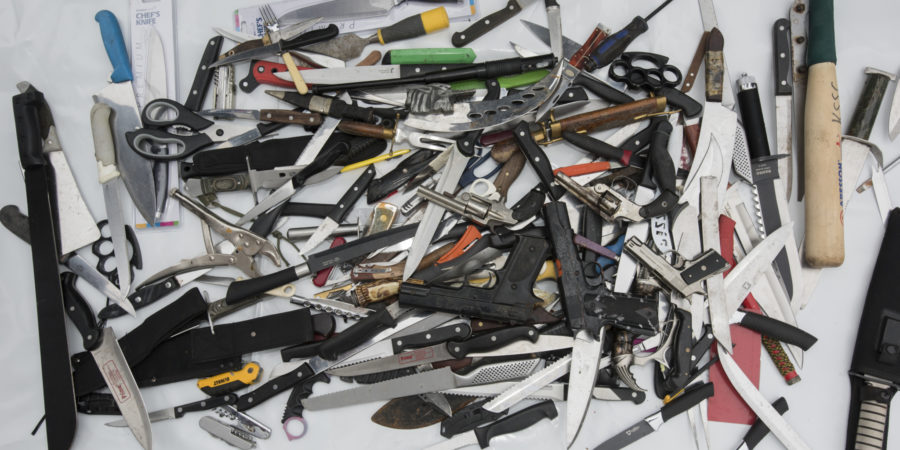 The West Midlands Police and Crime Commissioner has installed two new weapon surrender bins in Birmingham. The containers, which are designed for people to safely dispose of knives, were unveiled today.

The bins are just one of the ways the West Midlands Police and Crime Commissioner is tackling the increasing problem of knife crime, which has risen by 85% since 2012.

There are now 15 surrender bins in West Midlands all of which have come from requests from the local community with concerns about violent crime.

The new bin which has been installed are located at Morrisons in Rubery.

Commenting on the arrival of the new bin Assistant Police and Crime Commissioner, Ashley Bertie, said: “I’m very pleased we have been able to unveil two new bins in Birmingham. We have seen knife crime grow across the country and these bins are just one of the initiatives we are working on to get weapons off the streets.

“Communities in Birmingham have been asking for these bins so that they can play an active part in the fight against knife crime. Where the community wants a surrender bin, I will work with them to make that happen.

There are now 15 bins installed across Birmingham, Coventry and the Black Country. The PCC wants to see at least one in every local authority across the West Midlands.

Some of the other measures which the PCC is implementing to tackle violent crime include; gang mediators working to diffuse tension in communities, youth workers being placed in A&E departments to identify at risk young people and funding or diversionary activities for young people.

As well the knife bin in Rubery another weapon surrender bin has also been opened at Ghamkol Sharif Mosque in Small Heath.

Superintendent Sarah Burton from Birmingham East said: “This is a really welcome initiative, which will help the police in Birmingham tackle the growing problem of knife crime.

“No-one should be carrying knives; however it is important for people to know there are safe places to dispose of them before they are used to commit a crime or cause an injury.

“Sadly, knives are very easy to obtain. We have to ensure that people, particularly young people, are aware that if they carry a knife then it could be used against them.

“Alongside encouraging the disposal of knives, I would ask the public to give us any information that might help us to protect Birmingham’s young people and I would urge them to contact us on 101 or through Crime s toppers on 0800 555 111.”

Member of Parliament of Northfield Birmingham said: “Tackling violent crime effectively requires everyone to work together. Crucially it requires Government to give the Police the resources they need to keep us safe but community initiatives like this can also play an important role in helping to prevent crime.

“Surrender bins directly help to keep blades off the streets and they reinforce the message that if you carry a knife, you put yourself in danger as well as others”.

The 15 knife bin locations across the West Midlands can be found here.