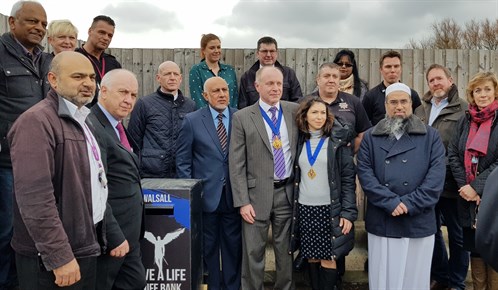 David Jamieson has invited Mark Brindley to cut the ribbon.

James was stabbed in the heart 400 metres from his parents’ home in Aldridge, Walsall, West Midlands.

The weapon surrender bin is a safe and secure container, which is designed for people to dispose of knives. This is the 13th bin the PCC has installed and is situation at the Tesco on Littleton Street West, Walsall.

The PCC has made it clear he will place a surrender bin in every local authority area in the West Midlands.

The weapon surrender bins are just one of the ways the West Midlands Police and Crime Commissioner is tackling the increasing problem of knife crime. The other bins have so far been placed in Wolverhampton, Birmingham, Dudley, Coventry and Sandwell.

Commenting on the arrival of the new bin, the West Midlands Police and Crime Commissioner, David Jamieson, said: “The people of Walsall have been telling us for some time that they would like a weapon surrender bin. I’m delighted to announce that we’ve been able to make this happen.

“The bins are providing people with a safe way to dispose of knives. Every knife posted into a surrender bin is potentially a life saved.”

“But this is only one of the ways I’m helping to tackle violent crime. I’m also ensuring that every single day in schools young people are educated about the dangers of knife crime.

“I am also investing in schemes designed to divert young people away from violence and I’m placing youth workers in A&E departments to identify vulnerable people caught up in a cycle of crime and to intervene and help them turn their lives around.”

The weapon surrender bins took hundreds of weapons off the streets last year.

Walsall Commander, Chief Superintendent Andy Parsons: “This is a really welcome initiative which will help us tackle the growing problem of knife crime.

“It’s very important that people know they have a safe place to dispose of a knife which they shouldn’t be carrying. If we can take knives off the streets of Walsall they cannot be used to commit a crime or cause injury.

“Sadly, knives are easy to obtain. We have to ensure that people, particularly young people, are aware of the devastating consequences of carrying a knife.

“We are working closely with young people and the wider community to highlight the risks of carrying and using knives and weapons.

“Alongside encouraging the disposal of knives, I would ask the public to give us any information that might help us to protect people and, ultimately, save lives by contacting us on 101 or via Crimestoppers anonymously on 0800 555 111.”

The locations of all of the Weapon Surrender Bins in the West Midlands can be found here.