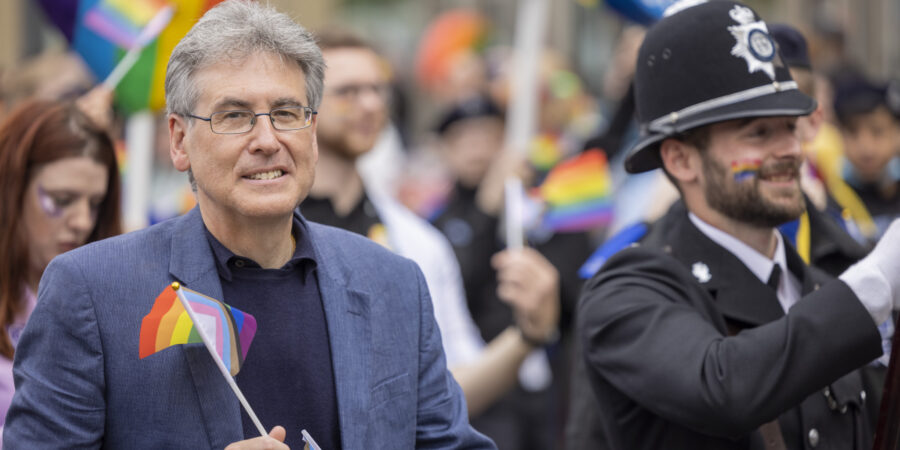 Ahead of Birmingham Pride this weekend, PCC Simon Foster says hate crimes committed against LGBTQ+ people will not be tolerated.

Birmingham Pride attracts over 100,000 people each year. They parade through the city and to the festival in the LGBTQ+ Village. It is usually held in May, but due to the COVID-19 pandemic has been moved to the weekend of 25th-26th September.

In his manifesto was a pledge to provide more support to LGBTQ+ victims of hate crime and of domestic abuse.

Statistics show that in the year ending March 2021, there were 1,188 hate crimes in the West Midlands directed at LGBTQ+ people.

Since his election, Simon Foster has put in place a new service to provide support to victims of hate crime across the region, offering emotional, personal and practical support to those who have been subjected to hate. He has also put funding in place to provide additional support for LGBTQ+ victims of domestic abuse and sexual violence.

Speaking ahead of Birmingham Pride, Mr Foster said “Abuse, hate and violence against LGBTQ+ people is unacceptable and I am committed to the prevention and elimination of hate crime including homophobia, biphobia and transphobia.

“We must encourage and facilitate the reporting of hate crime, ensure the perpetrators are held to account via the criminal justice system and provide the right support at the right time to victims of hate related crime.

“We saw a disgraceful violent incident recently in the LGBTQ+ Village which caused shock and distress across the community. I’m pleased West Midlands Police worked quickly to track down suspects.

“I will be out on the streets on Saturday marching with LGBTQ+ members and allies at West Midlands Police and other partners as we nail our colours to the mast in support of Pride.

“We will not forget the history of Stonewall and the origins of why we march – but I am pleased that our police force is made up of LGBTQ+ people and we are able to attend in full support of the cause. We are stronger together.”